When people ask 104-year-old Edward “Ed” Nartowicz what he owes his longevity to, he always says his secret is to “keep breathing.” The nice and witty centenarian celebrated his 104th birthday with friends and family on Monday at Elderwood at Williamsville, where he has resided since December. 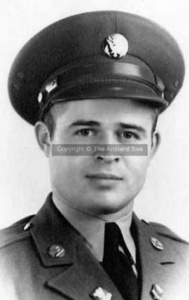 He joined the Air Force in 1941 and was still in training at Chanute Air Force Base in Illinois when Japanese planes attacked the U.S. naval base at Pearl Harbor.

“We were watching a movie when an officer jumped on the stations and said, ‘Fellas, we’re at war with Japan.’ Someone asked why, and the officer said, ‘Because they bombed Pearl Harbor.’ Then a sergeant jumped up and asked, ‘Where’s Pearl Harbor?’” Nartowicz said. “We didn’t know it was Hawaii.”

Nartowicz almost completed his training to become a pilot but did not pass his last physical fitness test. Instead, he became a member of the Special Operations Weather Team. He provided intelligence about weather patterns to help the troops plan and prepare for attacks during WWII.

Nartowicz was overseas for a few years and traveled to several places in Africa and Europe, but his favorite city was Marrakesh, Morocco.

“I loved being stationed in Morocco because it was beautiful,” he said. “There were mountains with snow on them, and snow would melt and fresh water would come cascading down the slope into the city. What did the people do with the water? They drank it, bathed in it and built swimming pools to swim in it. I enjoyed the swimming pools.”

While he was stationed in Marrakesh, he was injured in an accidental explosion. As part of the Special Operations Weather Team, Nartowicz would fill balloons with hydrogen and release them into the sky to study air currents. Unknown to Nartowicz, one of the hydrogen tanks had a leak, and when he walked in with a lit cigar in his hand, the tank exploded.

He was in the hospital for 22 days. He feared he would lose his eyesight and suffered burns to his face.

“That’s why I have such a nice complexion,” Nartowicz quipped.

Fortunately, he healed and was discharged in 1945. He got a job as an electronic technician at Bell Aircraft. He later married a girl named Virginia, whom he met in eighth grade while attending Pine Hill School in Cheektowaga.

“After I got back from the war, my friend set up a double date, but canceled it, so I had to go to the tavern and tell the girls he couldn’t make it. I walked in and saw the girls sitting in the back. There was this pretty girl sitting there, and the minute she saw me she said, ‘You’re Ed Nartowicz.

We went to school together.’ Music started to play, and we danced,” said Nartowicz. “That’s what brought us together.”

They settled on Ivanhoe Road in Cheektowaga and were married for 53 years.

Today, Nartowicz loves to watch football and baseball. He also drinks a glass of wine every night.

Nartowicz said he was excited about his party and to see family and friends, but also joked that “there may be a few jealous husbands there, too.”

Zeis laughed and added, “He’s got a great sense of humor. Everybody likes him.”

Posted at 08:40h CATEGORIES: All Articles, Elderwood by Brooke Lebeau