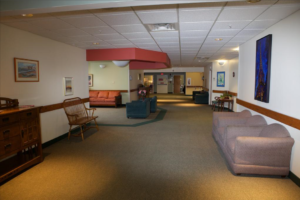 New ownership is coming to the Weinberg campus in Getzville. Photos by Jim Courtney

In what could be its biggest nursing home deal yet, Elderwood’s owners are working to acquire the majority of programs at Weinberg Campus in Getzville.

Though neither side would disclose the overall sale price yet, Elderwood owners agreed it is its biggest publicized deal since the $141 million acquisition that brought Post Acute Partners into the market in 2013.

The variety of programs, and the reputation of Weinberg, made the acquisition especially appealing, said Warren Cole, co-owner of Post Acute Partners and the Elderwood senior care network, headquartered downtown at 500 Seneca.

“It is a rare opportunity to buy a campus that’s highly regarded, beautifully constructed and beautifully situated with every level of care,” he said. “It’s really the holy grail of what we do.”

The Weinberg deal is the next in a series of buys by Post Acute Partners around the state, including last spring’s $10 million deal to acquire Odd Fellow & Rebekah Rehabilitation Center in Lockport; and Adirondack Tri-County Nursing and Rehabilitation Center Inc. in Warren County. In all, the company owns more than 20 facilities and employs more than 4,000. 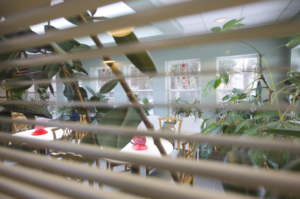 Elderwood already provides a full continuum of care at other sites throughout Western New York, from independent living to assisted living, skilled nursing and memory care. But most are single-asset properties, or at most, two levels, Cole said.

Elderwood also includes a transportation company, a pharmacy business and a managed longterm care company. Buying most of the Weinberg Campus assets also allows the company to grow and expand existing licenses for care.

“In the era of health care reform, you have to have a significant footprint so that you can be an efficient service provider to the hospitals and to the payers,” Cole said. “Our goal is to have a very broad footprint in Upstate New York and to provide as many levels of post acute care as we can, not for the sake of being big, but for the sake of being efficient and providing the highest quality care.”

The board hired an investment banking firm to help manage the sale process, receiving inquiries from about 165 interested parties, said Robert Mayer, Weinberg’s president and CEO.

“They met all the criteria we had outlined,” he said. “Certainly, they’re very well-known, they’re a high-quality organization and well-respected by the Department of Health.” 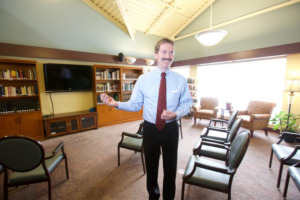 The board hired an investment banking firm to help manage the sale process, receiving inquiries from about 165 interested parties, said Robert Mayer, Weinberg’s president and CEO.

In all, the Weinberg Campus parent company oversees 10 nonprofit corporations on a 100-acre campus with combined revenue of more than $40 million. About 1,000 individuals receive services daily. The asset sale includes property, business operations and licenses, but not the actual corporations.

The sale does not include four low-income housing apartment buildings for seniors adjacent to or across the street from the campus, nor the parent company and a subsidized apartment complex in West Seneca licensed by the state Department of Mental Health. Proceeds from the sale will be used to further the Weinberg Campus corporation’s mission, Mayer said.

The sale to Post Acute Partners has been in the works for months. This summer, employees at Weinberg approved an 18-month labor deal through 1199 SEIU United Healthcare Workers East that included an “assumption agreement” that Elderwood would recognize the union and agree to bargain on a new contract prior to closing on the sale.

Since January, Mayer has told supporters in monthly email newsletters that campus officials had met with potential buyers and had narrowed the pool of suitors in an effort to find a buyer with the resources to upgrade facilities, technology and resident care. An agreement was expected to be reached in the coming months. But he also said it would likely take a year or more to receive approvals from the state, which ensures “business as usual” until sometime in 2018.

The campus is ranked No. 1 for total units on the Buffalo Business First Retirement Communities List in Western New York; and is the third-largest among area assisted living facilities.

“Adding this campus, and its location/geography, will allow us to expand on certain clinical programs that we have created,” he said, pointing to partners like Roswell Park Cancer Institute.

The deal is the latest, but certainly not the last: Cole said the company will close on a few more deals in the coming months, including another of similar size and scope that will add facilities across Upstate.

“We still have a lot of growth ahead of us,” he said. “We’ve positioned Elderwood Administrative Services upfront to have a lot of bandwidth and we haven’t come close to maxing out that bandwidth.”

Posted at 11:00h CATEGORIES: All Articles by Brooke Lebeau